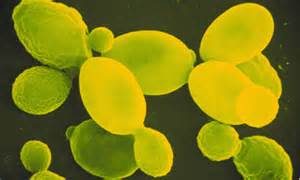 Have you ever wondered what exactly is the difference between an Ale and a Lager? Let’s chat about it.

Top-Fermenting yeast or Saccharomyces cerevisiae as we like to call it, is the most common yeast out there. Chances are, you consume it on a daily basis. This is the type of yeast that is common in bread making, wine making and beer making. Pretty good stuff, right? The reason we say it is top-fermenting is because as the fermentation process happens, the yeast cells circulate throughout the beer, magically converting the wort (sugary water) into alcohol and C02. As the process finishes, the yeast rises to the top creating a thick Krausen and if not removed, will drop to the bottom of the fermentation vessel. Ale yeast ferments at a warmer temperature (between 60F-75F), and because of this, reaches attenuation at a faster pace than Lagers. 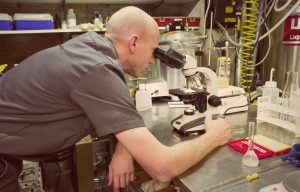 Our brewer Larry checking on the yeast culture.

Saccharomyces uvarum (Bottom-Fermenting) yeast cells work from the bottom up, at a slower pace and a colder temperature (46F-59F). The term “lager” comes from the German word “lagern” which means “to store.” The discovery of lager yeast is believed to have been made in the Middle-Ages when Bavarian brewers fermented and stored their beers in ice caves over the winter. Because of the longer, colder fermentation process, Lagers are generally very crisp and clean tasting.

Did any of that make sense? We hope so, but let’s be honest, at the end of the day- Ales or Lagers, we love them all!

Want to learn more about Yeast and the process of fermentation? Check out this video!